Crystal Quest Commercial GAC Filtration Systems are designed and manufactured for outstanding service and are ideal for treating a variety of different water problems. Utilizing the best filtration media and components, our systems outperform and outlast the competition. 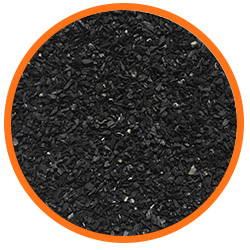 Commercial GAC has been known as the miracle media filter of choice by researchers for centuries due to its unique ability to improve taste, odor, and the color of water by removing undesirable contaminants, including potential carcinogens.

To explain in detail, activated carbon acts like a sponge, with a large surface area to absorb contaminants in the water through a process called adsorbency. The surface area of one pound of activated carbon is equivalent to 125 acres. Many scientists believe this is a result of an affinity that these chemicals have for carbon based on Van Der Waal forces, which is the attraction of intermolecular forces between molecules. In fact, the EPA has deemed GAC filters to be the recommended method for removing a host of potentially hazardous and possibly carcinogenic chemicals in drinking water due to these filtration abilities.

Crystal Quest Commercial Granular Activated Carbon (GAC) Systems are a cost-effective and reliable method for removing chlorine and inorganic contaminates from your water source. It also removes and reduces chlorine derivatives such as; THM or TTHM (for total trihalomethanes), haloacetic acids (HAAs), Chloroform, etc. Furthermore, our GAC media has been tested and certified to meet California’s Proposition 65 Safe Drinking Water and Toxic Enforcement Act to ensure that there is no leach back of aluminum, antimony, and arsenic.