Crystal Quest Commercial Lead Removal Systems are designed and manufactured for outstanding service and are ideal for treating a variety of different water problems. Utilizing the best filtration media and components, our systems outperform and outlast the competition. 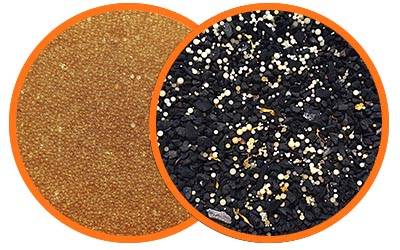 Water flows through high-quality resin beads. These beads are covered with sodium ions. As lead passes through, the resin beads act as a magnet, attracting lead in exchange for the sodium ions. Water flows through our SMART Multimedia to reduce contaminants even further. Eventually, the resin beads become saturated with mineral ions and have to be regenerated and it is conducted by the control valve on the top of the tank.

Lead (Pb) is a soft and heavy metal used in a surprisingly wide range of industrial applications and processes. It is a highly poisonous neurotoxin that can accumulate in both soft tissue and bone, leading to brain and nervous system disorders. Exposure to lead is especially dangerous for young and developing children. Most commonly it is introduced to the human body by ingestion of contaminated water and food, although it can be introduced through inhalation and direct contact as well.

Unfortunately, one of the most common methods of exposure is through contaminated drinking water. Homes and buildings built before 1986 regularly used lead pipes, fixtures and solder. Water, especially more acidic water, corrodes old pipes and fixtures like these over time and the lead dissolves into the water supply. (The Flint, Michigan water crisis was an example of this type of problem on a large scale. The water source itself was not contaminated, but instead the water was corroding old piping and lead was leaching into the water that way.) Once dissolved, lead is invisible, odorless and tasteless, making it extremely hard to detect without proper testing. Because lead is so dangerous and hard to detect, the EPA has set their maximum contaminant level goal for lead to zero. They recommend regular testing for lead contamination as well as using a water filter that is designed specifically to remove lead. To read more about what the EPA has to say about lead click here. Or read more from the Center for Disease Control.

Lead Removal Media flows through high-quality resin beads. These beads are covered with sodium ions. As lead passes through, the resin beads act as a magnet, attracting the lead in exchange for the sodium ions. Eventually, the resin beads become saturated with mineral ions and have to be regenerated and it is conducted by the control valve on the top of the tank. During regeneration, a strong brine solution is flushed through the resin tank, bathing the resin beads in a stream of sodium ions which replace the accumulated calcium and magnesium ions (hardness). The brine solution, carrying the displaced calcium and magnesium ions is the flushed down the drain by fresh water. The regenerated resin beads can be used again and again.

Water then flows through our SMART Multimedia, which includes 2 types of coconut shell Granulated Activated Carbons (Standard & Catalytic GAC) infused with our Eagle Redox Alloys® 6500 & 9500, and ion exchange resin to reduce contaminants such as heavy metals, i.e. lead and mercury, chlorine, chloramine, and inorganic products such as herbicides, pesticides, petroleum/pharmaceutical by-products and achieve a balanced pH.